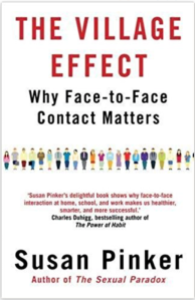 Marrying the findings of the new field of social neuroscience together with gripping human stories, award-winning author and psychologist Susan Pinker explores the impact of face-to-face contact from cradle to grave, from city to Sardinian mountain village, from classroom to workplace, from love to marriage to divorce. Her results are enlightening and enlivening, and they challenge our assumptions.
Most of us have left the literal village behind, and don’t want to give up our new technologies to go back there. But, as Pinker writes so compellingly, we need close social bonds and uninterrupted face-time with our friends and families in order to thrive – even to survive. Creating our own ‘village effect’ can make us happier. It can also save our lives.