In 2015 and 2016 I went to Loving Men in Wales. I loved it as an event, and the feeling of community, friendship and ease. It gives a feeling of what it can be like to live in a world where we are connected, and as gay men can enjoy a playful sense of ease and company. I also left each weekend with a deep pang of unrequited love, having on both occasions met a man who for various reasons was unavailable, but for whom I built up hopes that he might be.

The result was then spending the first months of the New Year struggling with a visceral feeling of loss, of pining for what never was but I had hoped might be and shame at feeling I was being weak to be so preoccupied with a man who it seemed showed little interest in thinking of me or having any wish to have any further connection. In fact with each man we did meet in the weeks after returning from Loving Men, and with each I felt them retreat from the eagerness of my desire to have more connection.

Once again, I then blamed myself for being too keen, for not playing it cool, for wearing my heart on my sleeve and being needy, invasive of their boundaries. So this year I decided that I would avoid Loving Men and go away to a space that was just for me, a 10 day silent retreat. On my way there I saw a man on the train who looked as if he was on his way to the retreat. As we got off I asked him if he was going to the meditation retreat and he was. We struck up a conversation and shared a taxi to the venue. In the remaining time left before going into silence we had a great time chatting. He’s straight so I was not worried about any unrequited love….or so I thought!

As we went into silence I noticed a curious dynamic in relation to this man and another. Someone had arrived just as we went into silence who I did find attractive, and as fate would have it he was placed to sit immediately behind me in the meditation hall, so I saw him each time I went in to meditate. The centre divides men and women into separate rooms and men and women are seated on separate sides in the dining room. This is great if you are straight, as it reduces the impact of seeing someone you are attracted to. Doesn’t really work if you are gay!

So over the time I sat meditating and in the stillness of the silent time between meditations I was present to a familiar dynamic. With the man I had met on the train, once we were in silence I became so anxious that I would be too much in some way – that I would be making eye contact when he just wanted to be in his own space or that I would impinge on him in some way (I noticed that I am at ease looking and smiling at people I know, but once on retreat this can feel awkward as we all withdraw into a more personal space. Also I noticed a fear of not being wanted once it was no longer possible to find out through a few words that someone was feeling friendly). With the man sitting behind me, I saw how my mind wove a story of desire and hope – that at the end of the retreat we would talk, he would turn out to be gay, we would meet and realise we were destined for each other. Exactly the story that fuelled my hopes with the two men at Loving Men, a belief we were meant to be together that in the end turned out to be not an intuition but an empty dream.

The end of the retreat brought two lessons. The man behind me, who I had anticipated talking with once we came out of silence, left immediately the silence was lifted and I never saw him! The man I had met on the train and had worried I was going to be too much for, had chosen me as his meditation buddy! I had noticed we tended to be at the same table after a while and had our drinks together in the breaks. This had helped me to relax around him and feel at ease. He then told me at the end that he is a diver and when diving you have one person as your buddy who you stay close to. He chose me.

Apart from showing how my mind got distracted during the retreat, how is this relevant? It actually was a perfect example of the dynamic I had just been reading about in a book about relationships and the dynamics that can happen between people. The book is called Attached, and it describes how people fall into three broad groups when entering relationship:

1. Anxious people are often preoccupied with thier relationships and tend to worry about their partner’s ability to love them back.
2. Avoidant people equate intimacy with a loss of independence and commonly try to minimise closeness.
3. Secure people feel comfortable with intimacy and are usually warm and loving.

A few people are anxious/avoidant, but this is more rare.

And a few suggestions about how to work with your type: 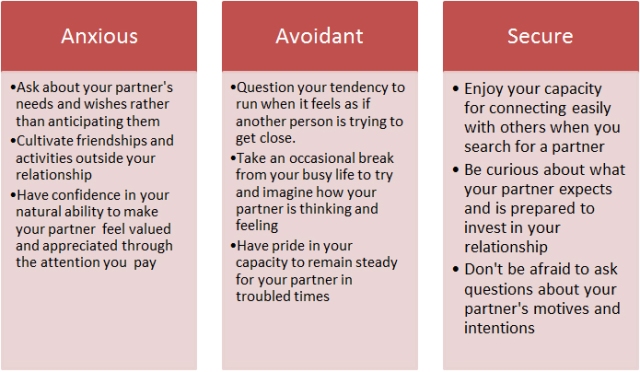 The book describes the different dynamics that can arise as these three types form relationships. It talks of how anxious types will often enter a relationship worrying that the other person will lose interest, that they will do something wrong to scare the other person away and take the blame if things do not work out. Avoidant’s will be concerned that the other person will become interested too quickly and so will give mixed messages – seeming to show interest whilst at the same time not replying to messages quickly and being ambivalent about committing. Secure people will not play games but be straight forward, showing if they like you, being open to commitment and ready to talk about anything that concerns them in the relationship rather than using it as a reason to pull away or play games.

What can happen is that anxious people create a template of what it feels like to fall in love – the worry, the heightened sense of uncertainty, the fear of rejection leading to the delight when the other seems to want you, but followed by fretting about why they have not replied to a text. The result of this template is that when an anxious person meets an avoidant it feels like love, because it feels like a familiar experience of what falling in love is like. Whereas meeting a secure person can feel flat – there’s no edge or drama, and so an anxious person can overlook the people who would be best able to give them a feeling of security as they chase after all the avoidant people they are drawn to.

Avoidant’s are drawn to anxious people as it fits with their script that people will become too demanding, needy and that they risk loosing their independence so in the end they need to drop this person in the hope of meeting the right person at some point in the future. It is not that avoidant’s do not want a relationship, but they can have an overly romantic idea of what their ideal partner should be like and so tend to be critical of the people they meet.

What I like about the book is that it does not make any type wrong and does not seek to fix anyone. It encourages you to be aware of your patterns and see how these interact with others, and to recognise that certain parings will be more likely to provide a feeling of security and being held by one’s partner than others. It does not say the neediness of the anxious type is wrong, just something that easily gets triggered when the partner is withdrawing or giving mixed messages, whereas with a partner who is ready to be fully present this dynamic occurs but is pacified by their willingness to hold. This can literally be the willingness of your  partner to take your hand when you want to hold there’s, rather than the avoidant’s response of shaking it off.

Avoidant’s are also looking for love, but have learnt to feel frightened of being overwhelmed. So for them if they recognise that always being attracted to anxious types will not be very likely to lead to a relationship they can relax in they can instead look to meet secure types – but they need to be ready for the challenge a secure person will offer of calling them out on their tendency to pull away. The secure person will not take the blame on themselves as the anxious person does when the avoidant pulls away, instead they will name what is happening and start a dialogue around it.

This is a brief synopsis of the points covered in the book, but if it has interested you or you recognise your type already I recommend reading it. “Know thyself” and you no longer have to live out unconscious dramas and stories. The self test form is below if you would like to find out your type. Or for a more detailed test taking about 15 minutes click here. To buy the book click here 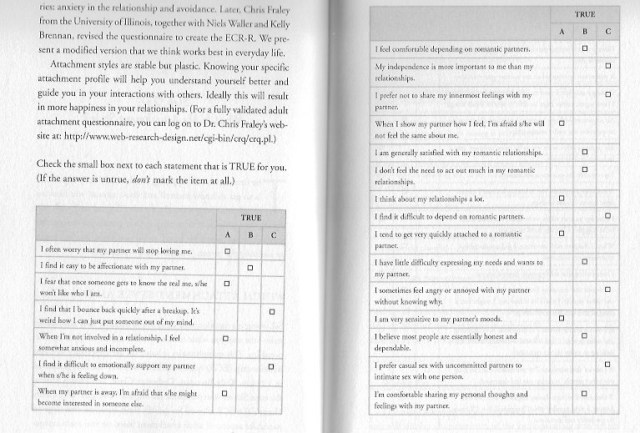 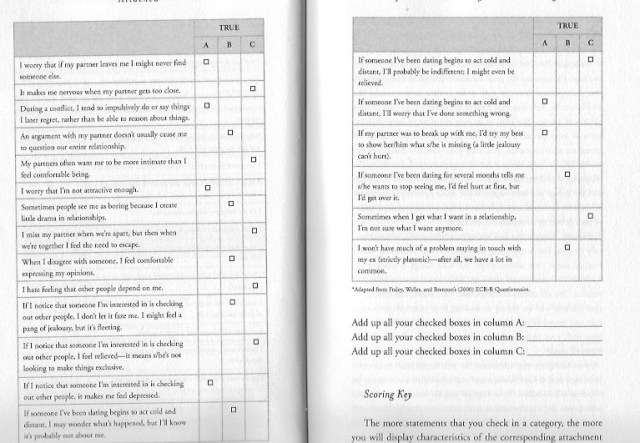